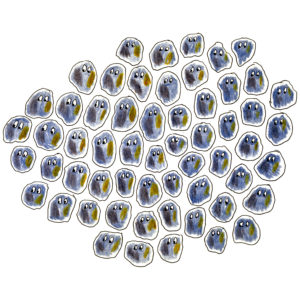 West Coast-based Chuck Nanney's “The Ghost in You,” 2019, employs 22K gold leaf and acrylic on plywood. The mid-career, cult-fave artist is on Bill Arning's radar and featured in a solo at the gallery through April 18, 2021.

Houston talent Terry Suprean's "Our Secret Sadness 10.22.20," 2020, is featured in a solo show at Bill Arning Exhibitions through April 18, 2021. Suprean is on many collectors' radars for his lapidary painting. West Coast-based Chuck Nanney's “The Ghost in You,” 2019, employs 22K gold leaf and acrylic on plywood. The mid-career, cult-fave artist is on Bill Arning's radar and featured in a solo at the gallery through April 18, 2021.

Houston talent Terry Suprean's "Our Secret Sadness 10.22.20," 2020, is featured in a solo show at Bill Arning Exhibitions through April 18, 2021. Suprean is on many collectors' radars for his lapidary painting.

Bill Arning is well known for identifying artists who deserve more recognition and finding creative ways to get new eyes on their work. Many artists with whom Arning developed first exhibitions are now household names enjoying museum retrospectives and impressive price levels.

He has directed and been chief curator for museums and smaller not-for-profit spaces, written essays and reviews, taught and mentored artists at all phases of development. Connecting patrons with artworks was always some part of each role and now is his actual job description.

Arning’s eponymous new gallery, Bill Arning Exhibitions, is fitting because he used to be known as a maker of critically acclaimed exhibitions, and for his role as a talent scout.

This newly minted gallerist’s greatest joy is getting into discussions with artists to understand what their dream shows would look like and going to extraordinary measures to manifest those dreams.

In an art world where too many artworks are experienced on tiny phone screens, objects deployed in space create poetic resonances that not even the most artfully curated Instagram feed can ever hope to match, and Arning is a master at presenting memorable cultural experiences in three dimensions.

Arning has followed the way the galleries he admires most mix international powerhouses with Texas-based artists.

To this end, shows by beloved Houston-based artists such as Tod Bailey, Terry Suprean and Chris Cascio will often be paired with solo projects by figures such as Michael St. John, Enoc Perez, and Chuck Nanney.

When he moved to Houston, Arning was often asked which Texas-based artists he had seen while in New York City and Boston, and he answered only James Surls, Vernon Fisher, Trenton Doyle Hancock, Joseph Havel, Dario Robleto and Mark Flood.

But one of his favorites was Michael Tracy whose retrospective blew Arning away at MoMA PS1 in New York in 1988. Arning is proud that this Texas master is trusting him to make a show with him in May.

While Arning curated shows in other gallerists’ spaces regularly starting in 1984, he is on his own now, putting his expertise and art eye to even greater use. In September 2020, he celebrated his 60th birthday by opening his first commercial gallery under his own banner.

This was the ultimate gift to himself, a place where he can share with Houston’s informed art-loving public his most profoundly personal vision.

While Arning’s taste is often edgy and pleasurably decadent and might even shock timid viewers, Bill Arning Exhibitions has successfully grown a following since opening in October 2020.

Arriving in Houston in 2009 after 10 years of curating at the MIT List Visual Arts Center in Cambridge, Massachusetts, Arning was immediately drawn to the walkable Montrose area. He was invited to visit celebrated architects Michael Landrum and Philip Paratore’s art-filled neighborhood bungalow. Shortly afterward on their advice he bought and preserved the Craftsman-style house immediately next door.

Landrum did the restoration of the 1912 house and has now designed Arning’s sublime, light-washed new gallery space.

The gallerist enlisted visionary graphic designer Peter Ahlberg of New York’s Ahl&Co to create an over the top, striking wall mural to catch the eye along a very well-trafficked part of West Alabama.

Bill Arning Exhibitions took over the former home of the longstanding spot, The Acadia Bakers. Occasional visitors still stop in to ask if it’s too late to order a king cake.

“I joke the bakery was here for 40 years so they had a very big window of opportunity, but if they buy a painting I will get them a cake to go with it,” Arning says.

Arning is a native New Yorker who is still not a good driver after 12 years in Texas. Taking advantage of Montrose’s walkability and still being the spiritual center for Houston’s gay and countercultural community (even after the loss of Disco Kroger and Half Price Books). Arning feels this area is perfect for reaching the new collectors he is cultivating.

After a life in museums, Arning says that his populist spirit soars watching neighbors stop in during dog walks. He keeping dog treats on his desk at all times. He also enjoys letting Houston art cognoscenti drink their coffees from nearby Siphon in his gallery. They linger and talk art, taking advantage of the plentiful window-ledge seating.

Arning also leaves the lights on nights and lets neighborhood strollers get an eyeful of the main gallery shows with hopes of prompting them to return during regular hours. In the first week after opening, Arning invested in folding chairs to have evenings of poetry readings, stand-up comedy, film screenings, artists talks, post-modern burlesque, dance and music performances, book parties, and more. He even plans to hosting community meetings once larger gatherings become possible again.

This true art lover’s goal is to bring people into the gallery at least one evening every week, Bill Arning Exhibition’s large colorful signs let everyone know that they are always invited in — just to enjoy the art.

The gallery’s initials used in their colorful logo, “BAE,” might refer to nickname of Houston’s favorite singer, or the cute one-syllable version of baby, but the most accurate version is the acronym for Before Anyone Else.

Arning frequently notices artists making brave new work before other art mavens and is thrilled to share those discoveries with Houston’s art-loving public.

For more information on the gallery and upcoming exhibitions, check out billarning.com.

This article is a paid advertorial and is not associated with or worked on by the PaperCity editorial staff.