Poignant, Playful, and a Healthy Dose of Sarcasm — Inside Two Artists’ Ode to the West Texas Landscape 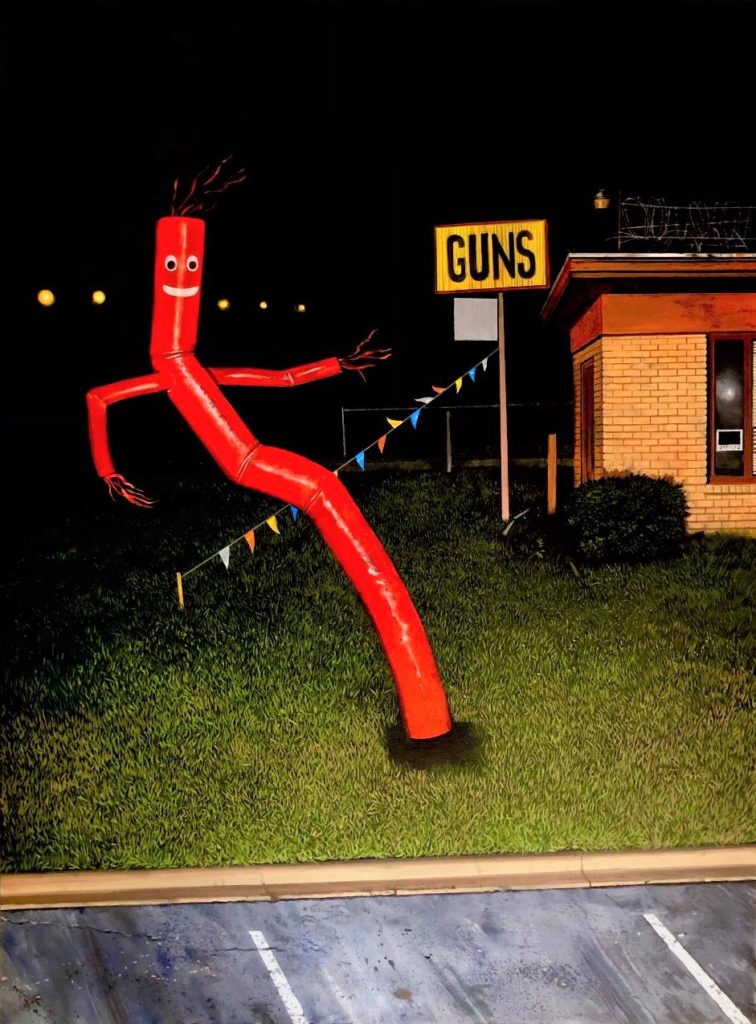 Margery Grella, owner of Artspace 111, knew what she was doing when she paired Daniel Blagg and Jill Johnson together for their current exhibition: “Edge of the Road.”

“Daniel Blagg and Jill Johnson share a unique eye for capturing the beautiful mystery that is the Texas landscape,” Grella states on the Artspace 111 website. “Representations of seemingly abandoned buildings and weather-faded road signs call to the idiom of the American Dream asking us to consider where that dream has led us. Painting allows Blagg the opportunity to make fluid and spontaneous decisions while photography allows Johnson to accurately capture reality.”

Blagg and Johnson spent their respective childhoods in West Texas farming communities. As a result, both artists have a keen eye for abandoned spaces and a signature dry humor. “That kind of lifestyle seeps into your bones,” Johnson tells PaperCity. “I don’t think Daniel and I would look at our subject matter if we hadn’t grown up that way.”

Daniel Blagg has become a constant in the DFW art scene over the past 40 years. He grew up in a large family learning to paint with watercolors and studying greats like Michelangelo and DaVinci. Later, Blagg moved into larger-scale portraits inspired by discarded objects and signs. “That stuff seeps into your subconscious. It says a lot about the human condition. The detritus of consumerism. We’re just reporters,” Blagg explains.

Blagg takes great pride in “Repose,” a peaceful portrait of a doe lounging on a Victorian couch. The image came to him in a re-occurring dream after he finished “Gun Sale,” a poignant political piece that he was moved to create. Blagg’s paintings toe the line between thoughtful and humorous — with a hefty dose of irony. He plays with details and placements of items that enhance the repartee of his subject matter. There is always more than what meets the eye demanding your attention.

Jill Johnson is a Fort Worth-based photographer with a photojournalism degree from the University of Texas. Johnson is well known for her sense of playfulness and love of abandoned West Texas landmarks, portraiture, travel, and animals. She captures her small-town subjects through the lens of her trusty Hasselblad camera.

“Shooting in this way made me fall in love with the magic of photography,” Johnson says. “Being in the darkroom and seeing the image forces you to be very thoughtful in how you are composing things.”

Johnson’s photos convey a sense of playfulness and freedom. In “Tumble,” she focuses on a large, intricate tumbleweed under an expansive, clear blue sky. “Growing up I’ll never forget those tumbleweeds,” Johnson says. “There’s a whole world inside them and they’re so iconic to the Texas landscape. They’re beautiful but painful. Kind of like West Texas.”

Johnson has an undeniable talent for tapping into sarcasm with her photos. “Beef” and “Meat Market” exemplify Johnson’s well-loved cheekiness by highlighting the blunt nature of the ever-looming cattle industry that plays a major role in the small towns she frequents.

Edge of the Road will be open to the public until January 14 at Artspace 111. Visit artspace111.com for more details.