Bradley Freels always pushes the Midway team to do something special.

The Porch gives aspiring and rising musicians a chance and everyone else some free entertainment.

The George is the hotel College Station never had before. 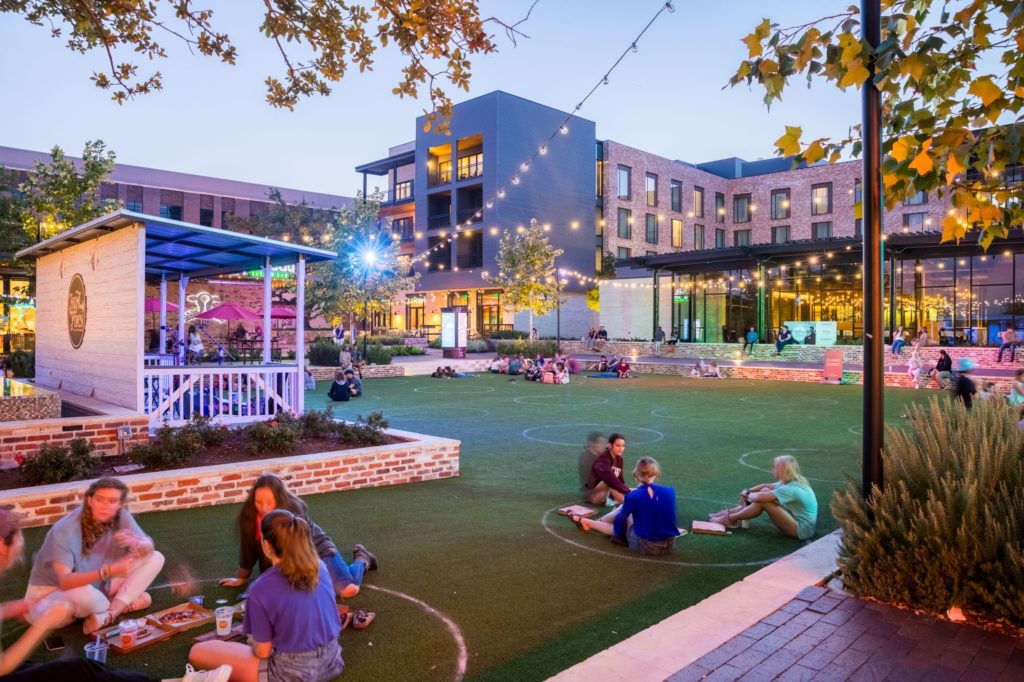 Bradley Freels always pushes the Midway team to do something special.

The Porch gives aspiring and rising musicians a chance and everyone else some free entertainment.

The George is the hotel College Station never had before.

COLLEGE STATION — It’s a Saturday night and the music is more than all right. Sitting on the back patio of PORTERS, sipping on a glass from the best wine list in Brazos Valley, everything Century Square’s The Front Porch brings is on full display.

One set, it’s a country band. The next, a heavy metal band. A few minutes later, a Christian rock group takes the microphone. There are college students dancing on the lawn, couples with graying hair holding hands and bopping their heads, families spread out on blankets in the grass. All safely separated, essentially in their own pods, with big white circles drawn in the grass. But still all together in another way, all enjoying the music and the beautiful night.

“It’s a scene,” says Hunter Ham, the Texas A&M University engineering senior studying to be a sommelier in his spare time who’s our waiter.

It is — in the best possible sense. Where else in Bryan-College Station could you find live music outdoors in a true community setting next to a top shelf steakhouse, where a college student can realistically find a path to becoming a sommelier, a short walk away from a Tiff’s Treats?

Nowhere. That didn’t exist before Century Square, the pioneering Midway mixed-use development right across the street from Texas A&M University. This is a grown-up wonderland, a center where young professionals, families and college students can all feel comfortable sure, but also a sophisticated beacon of what’s possible in this part of Texas.

It’s a world of its own compared to the university. There is no Texas A&M signage or merchandise. Century Square is its own, distinctive place.

Brad Freels, Midway’s Chairman and CEO, came up with the idea for The Front Porch based off the origin story of Texas A&M students turned country music icons Robert Earl Keen and Lyle Lovett. Long before they ever became famous, Keen and Lovett used to sit on an old front porch on Church Street in College Station and play bluegrass and folk music. Little crowds would even form around that old porch — with people simply drawn to the music.

“The College Station community is overflowing with musical talent, and we are excited we’ve been able to replicate the early beginnings of these music legends not only to entertain our guests, but also to allow performers the chance to gain exposure within the music industry,” Freels says.

Now, whole different generations are drawn to the music coming from Century Square’s own Front Porch, an old-looking porch set piece in the development’s central green space dubbed The Green. You’ll get live music from The Front Porch every Friday and Saturday night.

These are largely aspiring musicians and rising musicians. Maybe the next Lyle Lovett will even find his voice here. It’s apparent that Century Square has found its voice — and place within the community. Walk around this 30-acre development and you quickly get struck by how everything seems to fit together.

PORTERS, a new special occasion restaurant, fills a major need in the area as a perfect destination for more upscale outings like professional lunches and business happy hours.  It’s next to The George, the cool boutique hotel designed by MaRS with an arty, whimsical vibe that brings a new level of hotel accommodations to the region. Which is across the street from Cavalry Court, a boutique hotel inspired by the old motor courts of yesterday. Of course, when a hotel is designed by Houston’s renowned Rottet Studio, which also did The Surrey hotel in New York, it’s going to be anything but cookie cutter. You won’t be exactly roughing it at this “motor court.”

Century Square is full of pockets like this. On another corner, you’ll find a Hopdoddy Burger Bar with a patio that overlooks the lawn and The Front Porch scene. Sweet Paris occupies another corner with its own patio, looking out onto the lawn. In another pocket of Century Square, Mo’s Irish Pub, I Heart Mac & Cheese and Tiff’s Treat create a casual hangout type food scene. Call this the comfort foods corridor. With an Orangetheory Fitness right in there for some calorie-busting countermeasures. Residents of the on-site 100 Park luxury apartment homes get to live conveniently in the midst of it all.

And it’s all easily walkable — with wide sidewalks and plenty of parking in a free garage.

“I never knew College Station had something like this,” Austin visitor Rebecca Hall says. “I could see spending a lot of time here. I like how many places there are to sit outside and have a drink. Or grab dessert.”

Hall found Century Square because the friend she was visiting brought her to the center. “This is one of the things she wanted to show me while I was in town,” Hall says. “I’m always bragging about Austin. I guess she gets to brag a little now.”

Another Type of Model

While Houston’s CITYCENTRE is often thought of as the groundbreaking mixed-use development that changed everything for Midway — and West Houston for that matter — Century Square has emerged as a model for a different type of development. It shows what can be done in an area that’s largely gotten by with more nondescript, strip mall-type developments in the past.

Century Square raises the bar — and people’s expectations. Just good enough may no longer cut it in Bryant-College Station. Midway’s mixed-use center shines a light on a different way. On the possibilities that come with reaching higher. Century Square does this in College Station in a very community specific way, but it also illustrates what can be done in burgeoning areas outside of Texas’ mega cities.

It’s a market that means plenty to Freels, who earned his bachelor’s degree and MBA from A&M. Midway signed a 75-year lease for Century Square, showing just how committed this always forward-thinking company is to making the development an enduring staple of the community for generations to come.

Of course, if you’re visiting on a Friday or Saturday night and taking in the music coming from The Front Porch, you’re not going to be thinking about that. Then, Century Square is just a cool place to hang out, exactly what it’s supposed to be.

“You never know what type of music you’re going to hear,” Ham says.

Go ahead. Find a nice piece of grass — or a restaurant patio — and stay awhile.