Jackson, Wyoming's population of 10,000 can double or triple with visitors during busy tourist months. You can get traffic jams.

The elk antler arches at the four corners of Jackson Hole's town square park are the stuff of many an Instagram shot.

Don't let the modest sign fool you. Huff House is a plush Jackson Hole hotel retreat. And a rare find.

Jackson Hole's main drag can be extremely commercial, but it tries to retain its Old West ties.

While Jackson Hole may seem very commercial at times, the wonders of the Grand Tetons are always minutes away.

Billionaires in Cowboy Boots — Inside the Rich, Rugged Wonderland of Jackson Hole, Wyoming

Your Guide to Navigating a Town Full of Wild Contrasts 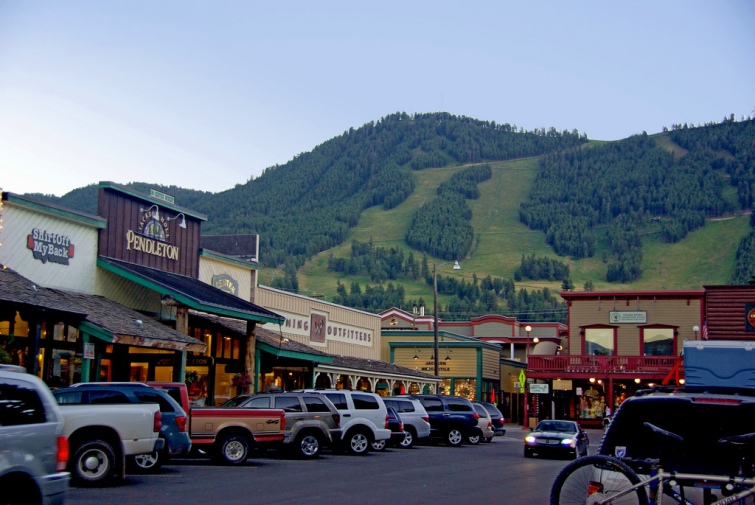 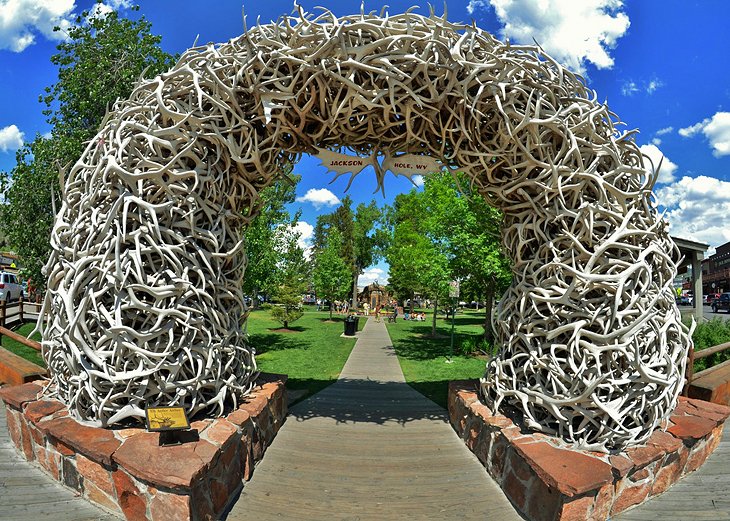 Jackson, Wyoming's population of 10,000 can double or triple with visitors during busy tourist months. You can get traffic jams.

The elk antler arches at the four corners of Jackson Hole's town square park are the stuff of many an Instagram shot.

Don't let the modest sign fool you. Huff House is a plush Jackson Hole hotel retreat. And a rare find.

Jackson Hole's main drag can be extremely commercial, but it tries to retain its Old West ties.

While Jackson Hole may seem very commercial at times, the wonders of the Grand Tetons are always minutes away.

JACKSON, Wyo. — The mountains loom overhead, mere blocks from a main drag filled with souvenir T-shirt shops, luxury stores and high-end art galleries. Things like the wooden plank boardwalk that’s ubiquitous through the main shopping section of town and the stage coach rides are meant to harken back to Jackson Hole’s Wild West past.

It’s more  complicated than that though — and Jackson as the locals call it (Jackson Hole is technically the whole valley, which includes Teton Village) tends to evoke strong emotions yeah or nay from Wyoming locals.

Maybe it’s due to too much time spent watching Kevin Costner’s melodrama Yellowstone, but I assumed that tension would be more noticeable in the town.

Instead, it’s largely a bunch of friendly enough folks trying to make money off tourists and more regular summer visitors.

There are some outward signs of why this is both one of the absolute richest and the most wealth unequal town in all of America. The vintage orange DeLorean parked haphazardly in an alleyway. The silver-haired guys slowly cruising around town in Porsches and Ferraris that are too much car for them to handle. But largely, the billionaires (especially the uber billionaires) are low keying it in worn jeans and cowboy boots.

Sure, the hostess at Gather — a restaurant on Glenwood Street near Town Square — acts like she’s manning the velvet ropes curtain at Club 54. It’s hard to get into many Jackson Hole restaurants during the height of the summer season and there can be the type of pretentiousness you’d never actually get in New York even when you do have reservations.

Still, there are plenty of more friendly characters you’ll come across as well.

Here’s a quick guide to the land where the billionaires wear dirty jeans too:

Huff House Inn and Cabins does not show up on most of the major hotel search engines (Expedia, Hotwire, etc…). This is a place you almost need to know about —or do some research on — to discover.

A quick note on Jackson hotel pricing. This town of 10,000 that swells to 25,000-plus during busy tourist months does not have many large hotels, which places a premium on the limited lodging options here. Jackson Hole’s Motel 6 runs more than $200 per night in high seasons. (And from the looks of it and the reviews, it’s not even a particularly nice Motel 6.) Jackson’s SpringHill Suites — typically a moderate Marriott class — costs more than $440 per night.

Huff House is not quite that expensive — and more importantly, it’s relatively new and impeccably run in a city where a number of older motels pose as luxury digs with prices approaching $300 per night and lots of buyer regret. Huff House was cleaner than clean during this coronavirus stay.

Its balcony rooms are a writer’s dream — and a perfect spot for working outdoors by laptop for anyone. After all, you’re likely in Jackson Hole at least in part to enjoy the cooler than cool summer temperatures (daytime highs average 82 degrees with little humidity in July and it dips into the fifties or lower at night.

Huff House is also a quick four-minute walk into the wooded boardwalk sidewalk main drag, but just far enough away that you’re not kept up all night by Jackson’s party crowd. We stayed in a second floor room in the newer Grant Building and left very happy with the choice.

Plus, Jeremy — the night manager/hotel clerk who checks you in — is so nice that you may want to take him home to your mother. Even if you’re already married.

There are so many shops crammed into Jackson’s town center that you’re bound to just stumble into a few. There are plenty where you can get $10.95 T-shirts. And a number where you can buy a $700,000 piece of Western art.

Still, Wild West Designs — Antler Lighting and Decor is one Jackson store that stands out for all the right reasons. Located right on Broadway, with beer benches out front (you won’t miss them), this place may be most known for the handcrafted antler chandeliers it sells, but it’s much more than a one trick pony. This is a sprawling multi-story wonderland of western furniture and antiques.

There are ornate handcrafted wooden tables that could handle the seating for a Game of Thrones king’s court that cost more than many people make in a year. But there are also smaller rocks and jewels and beautiful Christmas ornaments for under $20. This is also a spot where you’re encouraged to explore no matter your tax bracket.

My 7-year-0ld daughter considers herself a Christmas ornament collector and the two gentleman managers running the place couldn’t have been nicer to her, answering questions and actually nudged her to touch the mementos.

What to Do in Jackson Hole

Eat? And bask in the beyond brisk summer nights? That’s what my family of five did. Hatch Taqueria & Tequilas proved to be a surprising good tacos spot — especially if you like salmon and tuna tacos and corn shells. Gather’s food is good if you get past the cooler-than-thou gatekeeper. Really, if you’re sitting outside on a mountain night with a drink in your hand, it’s hard to go too wrong.

Going up the gondola to the top of the mountain is also fun (and free after 5 pm). The mountain biking in the Tetons more than lives up to expectations. And there’s even a small old school playhouse in Jackson Hole’s oldest building that’s still holding performances. (The fighting scenes are now done in slow motion — in a nod to coronavirus social distancing requirements.)

Of course, one of the main larger tourist draws to Jackson Hole is how close it is to Yellowstone National Park. While towns like West Yellowstone, Montana may make for a more reasonable Yellowstone base, going from Jackson Hole presents the most picturesque drive. You pass through Grand Teton National Park, which is right outside of town, to make the 57-mile journey to the Yellowstone’s South Gate.

Plus, the contrast between the majestic natural wonders of Yellowstone and the man-made wealth of Jackson make for their own trip.

Seeing the striking Grand Prismatic in the morning and picking up a bottle of bubbly to go at Bin-22 to cap off the night, make for quite the wondrous contrast.

You’re in Jackson Hole, not the real world. Might as well embrace it.