Tiger Woods broke into his signature fist pump on sinking a birdie putt on the 18th hole to force a playoff with Rocco Mediate during the best U.S. Open ever.

Rocco Mediate pushed a one-legged Tiger Woods to the brink — and then some in the 2008 U.S. Open.

Tiger Woods’ Greatest Moment? Turning Yankees Legend Reggie Jackson Into a Complete Dork at the Most Epic Major Ever 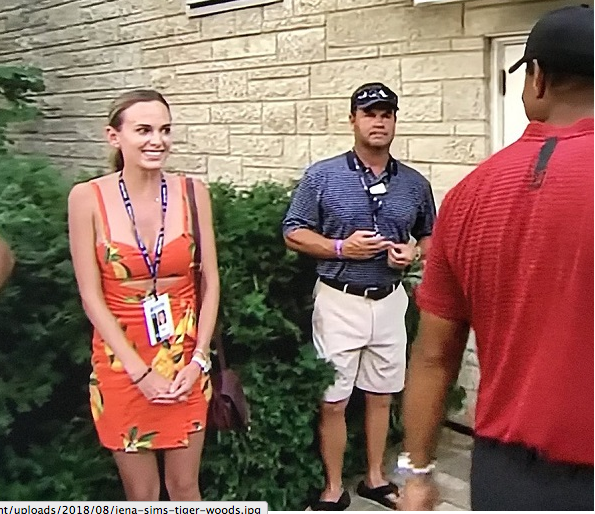 Tiger Woods broke into his signature fist pump on sinking a birdie putt on the 18th hole to force a playoff with Rocco Mediate during the best U.S. Open ever.

Rocco Mediate pushed a one-legged Tiger Woods to the brink — and then some in the 2008 U.S. Open.

Justin Timberlake wrote a glowing homage to him in Time magazine. Jim Nantz refuses to stop talking about him — calling his comeback green jacket grab, “the best event I’ve ever covered.” It’s all about Tiger Woods.

But while this Masters moment puts the 43-year-old Woods back on the stalking Jack Nicklaus track, it’s not his most incredible win. No, that would be the 2008 U.S. Open at Torrey Pines when Woods limped through 91 holes on a fractured leg to win major No. 14.

Covering the event for WorldGolf, I walked the last 55 holes of ’08 Open, inside the ropes with Tiger’s group, In a career that’s been marked by some blind luck (landing in New York as a young reporter when the Yankees were about to go dynastic, the Knicks were actually good — Jeff Van Gundy and Allan Houston stunning Miami good, and Jason Kidd and Mark Messier were changing games), I’ve covered five World Series, three NBA Finals, four Final Fours, three Stanley Cup Finals, a Houston Super Bowl and more than a half dozen golf majors.

But with the possible exception of the Houston Astros’ post-Hurricane Harvey world championship run, nothing can match the pure electricity of Tiger Woods dragging his broken leg around Torrey Pines and absolutely refusing to buckle. He’d be pushed to an 18-hole Monday playoff, one that brought New York Yankees legend Reggie Jackson inside the ropes to walk with the lucky media members given access.

This is what I wrote about the round at the time:

Reggie Jackson wears golf shoes for the big day, his best FootJoys laced up tight. Yes, even Reggie Jackson — one of the coolest athletes in the history of sports — becomes a dork for Tiger Woods.

Mr. October follows Mr. April/Mr. June/Mr. July/Mr. August — heck if there’s a golf major that month, Tiger owns it — for all 19 playoffs holes of the most thrilling, historic, twisting-and-turning drama queen of a sports event many of us will ever see. Reggie’s not above this, three home runs in a legendary World Series game regardless.

No one’s above this.

The 108th U.S. Open at Torrey Pines morphs into that Haley’s Comet of a sports event where 22-year-old kids walk out of the gates telling their buddies that they’re going to tell their unborn grandkids about the day Tiger Woods turned back the everyman who just wouldn’t die — on one good knee.

So Reggie Jackson walks along inside the ropes with the rest of media members lucky enough to get that access sleeve — and sometimes you just have to drop that often invaluable cynicism and admit you’re lucky in this job. Jackson looks just as dorky as any of the writers stomping down Torrey Pines South’s fairways wearing their own golf shoes, too.

Maybe more so. Because he’s freakin’ Reggie Jackson. What does he think he needs those golf shoes for? Is Tiger going to turn to the gallery, notice Reggie Jackson standing next to the tee box, and call out, “Hey, October, how about you handle this par 3?”

“I tell you what,” Jackson almost scream whispers as Tiger Woods sizes up a long putt on 16. “I’m going to be hitting some golf balls tonight.”

A marshal turns to shush. Then, he realizes he’s staring at Mr. October. So he glares at me for asking the question, instead.

That’s it. That’s what it boils down to. That’s how you explain the often indescribable. Tiger turns even Reggie Jackson into that kid who’s a little too excited for his own good. You know, the one who topples through the ropes and tumbles into a sand trap at tournament’s end (and there are plenty of those at Torrey).

After Woods survives 91 holes, produces five shots that will remain in golf’s all-time highlight reel (five all-time shots in one tourney), kicks away the one-shot, long-shot of a 45-year-old dreamer who just won’t let go of that major lifeboat, the greatest athlete of the last half century finally appears to get it, too.

For the first time ever, on a sun-drenched Southern California green surrounded by the biggest, most joyous mosh pit of people golf’s ever seen, Tiger seems to at least realize what his no-way-yes-it-happened-again feats mean to so many people.

Most of the 24,000 who pack Torrey Pines on a workday Monday morning just don’t want to leave. For once, Tiger Woods feels no rush to bolt to that waiting car, either. (There’s always an idling car for guys like Tiger.)

He thanks the fans, and while Tiger will never be as smooth as Phil Mickelson, or come across as genuine as today’s foil, Rocco Mediate, at something like this, it appears heartfelt. The tip-of-a-needle focused competitor who never ever acknowledges a single shout from the gallery when he’s working seems a little less robotic and a lot more human now.

Maybe it’s the soon-to-be-throbbing (no pain medication lasts forever) left leg that makes Tiger himself realize he’s human, that even for him there are no guarantees in majors (not even his ability to play in next month’s British Open). Maybe, this week, five incredible days for golf, show Tiger how small the circle he lets in on his joy really is.

A week following Tiger in SoCal, and the people he seems genuinely happy to see appears to number four: His wife Elin, his 1-year-old-daughter Sam, his caddie Steve Williams and his agent Mark Steinberg (usually).

Forget those entourage clichés. Tiger’s no Vincent Chase. Even Reggie Jackson cannot come close to getting a moment.

“He’s almost as mean as Gibson to these other golfers, too.”

Reggie laughs. And keeps walking. Tiger’s headed to 18, still down one.

Woods is certainly heartless when Mediate, the man who many in the crowd couldn’t help but switch allegiance to by 18, is so close to the trophy that would put him into the history books as one of sports’ all-time great underdog tales. Rocco almost elbowed aside Buster Douglas and gave that 1985 Villanova hoops team a run for its highlights.

Imagine that, Rocco Mediate and his button hat, remembered for all time. Tiger certainly can’t. In truth, neither can Reggie.

“Tiger’s stalking him,” Jackson chortles, even after Mediate erases a three-shot deficit with only eight holes to play, even after he takes a one shot lead to 18 for a second straight day. “He never gives up. You’d have to kill the guy to stop him.

“If he smells blood on you, he’s going to have a meal.”

When it effectively ends with Mediate’s bad tee shot on No. 7 — the first sudden death playoff hole, the one hole that’s happened to give Rocco fits all week — Mr. Happy finally feels it. After Woods is rushed away on a cart full of San Diego’s finest, Mediate breaks down with a few tears.

The guy who made a joke of everything all week, the man who plays Chris Rock for the media all week, the competitive prankster who shows up in Tiger red for the playoff, can hide how much he really wants it, yearns for it, no more.

“I’m a little disappointed,” Mediate manages, his eyes screaming “it’s much more than a little.”

“My heart is all over that golf course. . . I know I scared him. I know I did. He had to birdie the last hole again to tie me. Again.”

Tiger takes a little bit of Rocco with him to that trophy ceremony, too. The greatest golfer in history shares his joy, does what Rocco’s been doing all week, all his life, really.

Even another cold-blooded sports killer like Reggie Jackson must admit that’s beautiful to see, too.