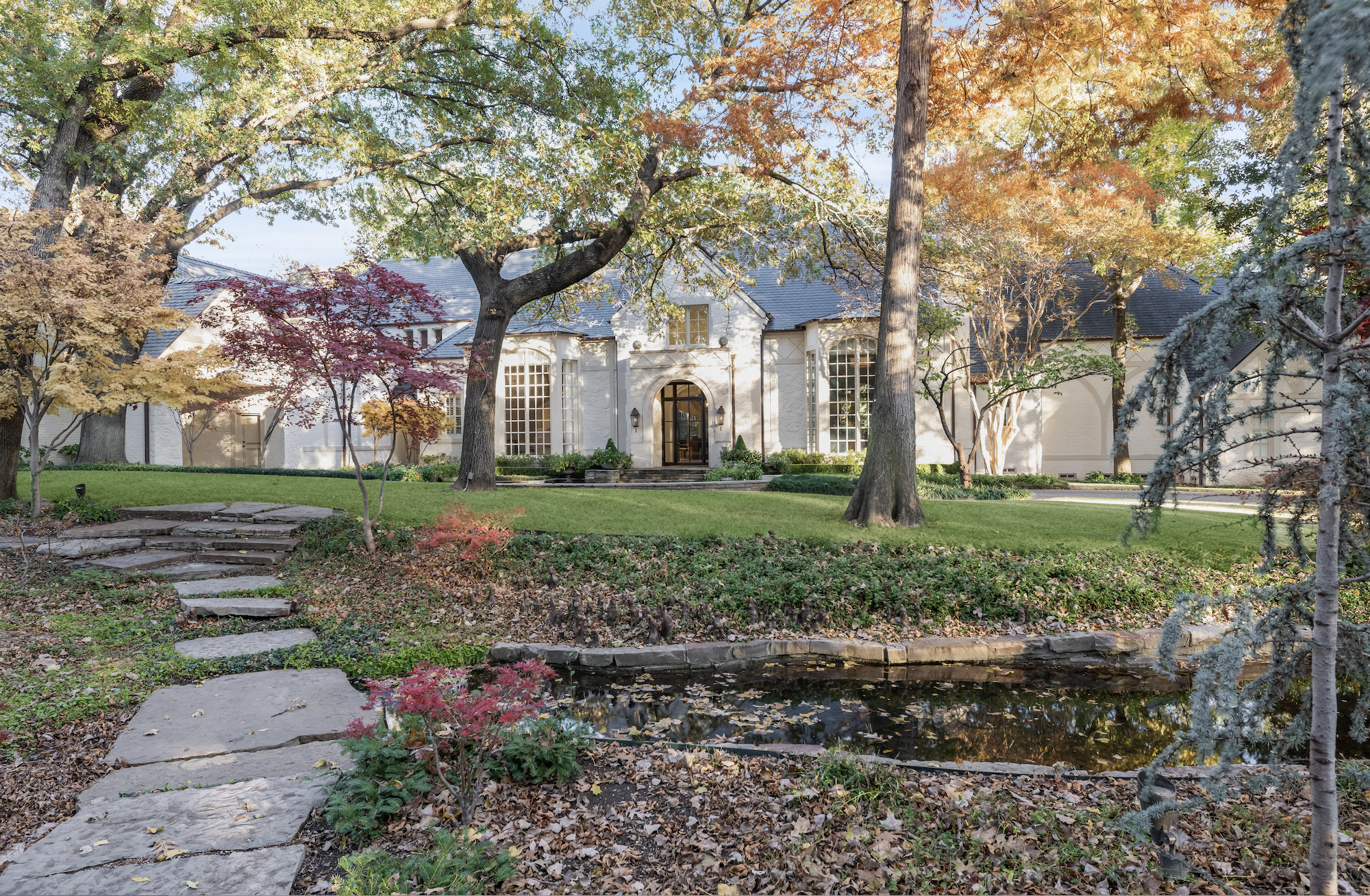 The 2022 Kips Bay Decorator Show House Dallas in Sunnybrook Estates in Old Preston Hollow will be transformed by 24 top designers, and is open to the public September 23 through October 24 with a VIP opening day on Thursday, September 22.

The 24 designers and architects from across the U.S. who will make their mark on this year’s Kips Bay Decorator Show House Dallas have been announced — and trust us when we say we cannot wait to see how they transform this Old Preston Hollow estate and its lush grounds.

Located at 9250 Meadowbrook Drive, the home sits on 2.3 lush acres with a creek and has five bedrooms and eight bathrooms, an elevator, four-car garage, motor court, in-home guest quarters, and pool-house apartment, which will set the stage for memorable interiors from this year’s crop of talent. Beyond that, the Show House benefits the Kips Bay Boys & Girls Club, which provides young people with educational and developmental programs in New York City, as well as local nonprofits Dwell with Dignity and The Crystal Charity Ball.

Initially founded in 1973 as a fundraiser to benefit Kips Bay Boys & Girls Club in New York, the Kips Bay Decorator Show House added the annual Palm Beach Show House in 2017, followed by the annual Dallas Show House in 2020, raising more than $25 million for the organization since its founding.

CV: In his 40-plus years in interior design, Baratta’s work has graced more than 70 magazine covers around the world. Known as the king of East-Coast chic, he is one of Traditional Home’s 20 Design Icons and was awarded Benjamin Moore’s coveted Hue Award for lifetime achievement in design. Other honors include the designation of Designer in Residence at Colonial Williamsburg and being selected to renovate Drumthwacket, the historic residence of the Governor and First Lady of New Jersey.

CV: Armed with an art history degree from Princeton University and a master’s in interior design from The New England School of Art and Design, Davis is a founding member of the Asian American Pacific Islander Design Alliance (AAPIDA). She is also the founder and creative director of innovative hardware brand Nest Studio, which supports working mothers as well as socially conscious manufacturers and suppliers.

CV: Cathey, a Dallas native, received her undergraduate degree from The University of Texas at Austin and continued her education at the New York School of Interior Design. She worked for premier firms in both New York and Dallas before launching her own firm, Avrea & Company, in 2005. She serves clients in Dallas and across the country, from Colorado and Montana to Florida and New York.

CV: Established by Blaire Murfree in 2016, Blaire Designs has been featured in publications ranging from Luxe Interiors and Design, Flower Magazine, and Interior Design Magazine to The Nashville Edit and Nashville Interiors. The Tennessee native, a graduate of Vanderbilt University, was named to the Luxe Gold list in 2020 and the Women in Design list in 2021.

CV: Born and raised in Rome, Branca’s classically beautiful interiors have been featured in Architectural Digest, Town & Country, The New York Times, Veranda, Elle Decor, and others. She has been recognized within the industry with awards from House Beautiful Master Class and owns Casa Branca, her collections of fabric, wallpaper, accessories and furniture, available through James showroom.

CV: Originally from South Carolina, Byron launched his design studio in 2016 and has been featured in Architectural Digest, House Beautiful, HGTV, Modern Luxury, and Aspire. His first project earned him a spot in Home & Design’s Hot Talent feature. He was also listed among House Beautiful’s Next Wave class of designers in 2022.

CV: Kim’s work has been featured in House Beautiful, The Wall Street Journal, Forbes, Rue Magazine, Martha Stewart, AD Pro, Domino, and others. Her work is influenced by her time living in Los Angeles, New York, and Paris, and always has a nod toward surfer cool and laid-back luxury.

CV: Christopher Peacock, known for handcrafted, classic, British cabinetry made in the U.S. and design for kitchens, dressing rooms, baths and throughout the home, Peacock has worked on the homes of two U.S. presidents, among other notable clients. He began his interior design career in London in the early 1980s, then launched Christopher Peacock Cabinetry in 1992 in Greenwich, Connecticut. His work is regularly published in national and international publications, and he has been invited to participate in the Kips Bay Decorator Show House in New York City eight times.

CV: Andrew Fisher (an established designer and fine artist who has worked with John Hallock and Tony Duquette) and Jeffry Weisman (who earned his bachelor’s degree in design and an MBA from Stanford) joined forces to create Fisher Weisman in 2000 and published a monograph of their work, Artful Decoration (Monacelli Press) in 2013. Their first employee, Bryn Bugioni, spent 10 years as senior designer before opening her own firm. In 2019, she returned to the firm as partner, creating what is now Fisher Weisman Brugioni, which the New York Times Sunday Magazine described as “drop dead, big city chic.”

CV: After receiving his bachelor of architecture from Louisiana State University and attending the New York School of Interior Design, Graci worked with designers  David Easton, Michael Carbine, and the late Greg Jordan before opening his  firm in 2009. Graci is known for his richly layered, collected style and has clients in Indianapolis, Boston, Houston, Mississippi, and New Orleans.

CV: Dallas native Harold Leidner received his degree in landscape architecture from Texas A&M University and has owned his namesake landscape firm for 30 years, focusing on high-end residential design and construction. Before pursuing his passion for landscape design, he worked for Neiman Marcus, where he learned all he needed to know about customer service.

CV: Southern California-based Sulaiman is a member of the Leaders of Design Council and was included in Interior Design Magazine’s 2020 Women in Design and 2021 Best in Design features. Her full-service interior architecture and design studio was founded in 2011 and her work has been featured in Architectural Digest, AD Pro, Vogue, Luxe Interiors + Design, CA Home + Design, and others.

CV: A self-described maximalist with a penchant for color, Ladd was born in Brazil and moved to Kentucky with her family to raise horses before entering the fashion and textiles industry in Los Angeles. She entered the interior design world with a splash in 2015 in Lexington, when a local interior and lifestyle publication featured her family home. She represented Kentucky in Business of Home’s 50 States Project in 2021. She was named a New Trad by Traditional Home in 2021 and part of House Beautiful’s Next Wave Class of 2022.

CV: Levy incorporates an understanding of art, architecture, fashion, and finance into his work and has been nationally recognized for his residential, corporate, and commercial design projects. His work has been featured in publications including House & Garden, Traditional Home, Veranda, Interior Design, American Way, and The New York Times.

CV: Prior to launching LC Studio, partners Lance Scott and Cecily Waud worked at David Kleinberg Design Associates, where Scott was a partner with 16 years of tenure and Waud trained as a decorator. Cecily’s foundation in art and interior design and love of travel, architecture, and fashion have contributed to her being named a member of Vogue100 and led to her work on the young boards of The Norton Museum, Second Stage Theater, Young Collectors Council at the Guggenheim, and the School of American Ballet. Scott’s interior design projects have been featured in Architectural Digest, Elle Decor, Galerie, Veranda, Luxe, and numerous books.

CV: Sisters Leslie Martin and Kim Meardon are passionate about creating homes rooted in traditional design that feel current and approachable. With nine children between them, they always keep in mind that a home can look incredible and still remain functional. Named one of Traditional Home’s Rising Stars of 2021, M + M has tackled projects from coast to coast and is often described as polished, layered, and sophisticated.

CV: Natasha Baradaran established her design firm in 2000 and her work has been featured in Architectural Digest, Elle Decor, Veranda, W Magazine, Town & Country, and others. She received West Hollywood’s Pacific Design Center’s Star on the Rise award and was included in The Hollywood Reporter’s list of the 25 Most Influential Interior Designers in Hollywood.

CV: After completing her master’s degree in interior architecture at Pratt Institute, Pittman worked alongside her interior designer mother in Los Angeles before establishing her firm in Dallas. Her home in L.A. was recently featured in Veranda Magazine.

CV: McLean was awarded The Philip Shutze Award for Residential Design and was hired by the Governor and First Lady of Georgia to design the ballroom in the Georgia Governor’s Mansion. She has designed model condominiums for the St. Regis Hotel Residences and was the first Honorary Design Chair of The Cathedral Antiques Show. She was awarded the Bulldog 100 Business Award and the Emily Quinn Pou Professional Achievement Award from her alma mater, the University of Georgia, where she received her degree in furnishings and interiors.

CV: Qatar-born AbouZanat was raised in Lebanon and founded PROJECT AZ in New York City in 2017. He was named one of Architectural Digest Middle East’s Top 50 Designers in 2022 and profiled in 1stDibs’ Introspective Magazine as a Designer to Watch in 2021. He founded interior design platform Interior Collab to advocate for the power of community amongst designers, share resources, help connect clients to designers, and spearhead events that help the planet and local communities.

CV: Schooler began her career leading groups to England and Virginia to study the great houses of Britain and their influence on American decorative arts, including lecturers from Christie’s and the Victoria & Albert Museum. Her design work has been published in Southern Accents, Veranda, and others. She is also the owner of Wolf Hall Antiques in Dallas.

CV: Johnstone’s European-influenced interiors with a modern spin have been featured in House Beautiful, Traditional Home, Chicago Magazine, Luxe, The New York Times, ArchDigest.com, Veranda.com, Tory Daily, and others. She has been named to the Luxe Gold List multiple times and recognized as a Next Wave interior designer by House Beautiful. She is the co-author of A Loving Table, an entertaining book highlighting traditions and tastemakers around the world.