Forced to Be Shortened to Just Four Days, the Designer Show House and Fundraiser is Focusing on a Weekend-Long Celebration For months, the fanfare surrounding the Kips Bay Decorator Show House Dallas was playing out as usual. In June, a sprawling, 12,470-square-foot estate in Old Preston Hollow was announced as the site of the prestigious event. In July, the 24 designers and architects that would transform the home into a visual wonderland were announced. Just three weeks ago, Veranda, the national media sponsor, shared preview sketches teasing the Texas show house’s maximalist rooms. That same week in August, however, a bright red Stop Work Order was posted outside of 9250 Meadowbrook Drive. Of course, it was a major inconvenience for the always-hurried Kips Bay designers, but the sign was just the tip of the iceberg.

Work on the home was halted for two-and-a-half weeks, during which the Kips Bay team, according to director of special events and corporate partnerships at Kips Bay Boys & Girls Club Nazira Handal, learned they had needed to file more permits than had been required during the past two years. The permit change, per Handal, was spurred by the Inwood-Northwest Homeowners’ Association’s belief that the Kips Bay Show House be categorized as a commercial event.

“I do understand that there is money raised with ticket sales and sponsorships, but in no way, shape, or form is this a commercial event,” says Handal, who has worked on 16 show houses in her 11 years with Kips Bay.

The City of Dallas was extremely open to negotiations, according to Handal, but asked Kips Bay to come to an agreement with the homeowners association. The Kips Bay Decorator Show House Dallas has taken place in Preston Hollow for the past two years.

Handal admits to traffic issues and acknowledged that, while the Lovers Lane United Methodist Church parking lot in the neighborhood had been rented out each year to shuttle visitors to and from the Show House, most had preferred to park on the streets due to Covid or convenience. This year, however, she wanted to ensure things were different. The Show House location at 9250 Meadowbrook Drive is situated directly across from the Lovers Lane United Methodist Church parking lot. Additional police officers and traffic attendants had also been hired.

“I don’t blame them about traffic,” Handal says. “It’s a very prestigious neighborhood and they want their privacy. But we have done everything in our power, especially this year, to deliver a Show House without any hiccups.”

With less than a month until the opening, it was too late for a plan B — or a different neighborhood. When emailed to ask why concerns weren’t brought to Kips Bay earlier than August, Burke was unresponsive.

So, after failed negotiations with the homeowners association, the Kips Bay team took it back to the City. “I think the City of Dallas saw how much we were trying to negotiate and how much we were willing to give up,” Handal adds. “That’s when the City started taking on more of a mediator role.”

Ultimately, an agreement was reached. The Kips Bay Decorator Show House Dallas would take place this year at 9250 Meadowbrook Drive in Old Preston Hollow, but instead of running for a full month, the home would be open to the public for just four days.

Kips Bay Boys & Girls Club has produced a Show House on the Upper East Side in New York City for 47 years, expanding the elite event to Palm Beach in 2017, then to Dallas. And while the Show House has all the trappings of a commercial affair (including tickets starting at $40), it’s a fundraiser at its core, raising more than $25 million for charity since its founding.

“It’s a bit of a Robin Hood thing if you ask me,” shares Christopher Peacock, a trustee of Kips Bay who has participated in nine of the organization’s Show Houses since 1999, including this year’s Dallas event. “You’re giving people the opportunity to build their careers and the opportunity for people to come see something incredible. What is sad to me when something like this happens, and I honestly don’t know why it’s happened, is that the people who benefit from this won’t benefit as much.”

In addition to supporting the Kips Bay Boys & Girls Club, which provides enrichment programs for New York City children, Kips Bay show homes include partnerships with local charities — in Dallas, those are Dwell with Dignity, a nonprofit agency dedicated to creating soothing, inspiring homes for families struggling with homelessness and poverty, and The Crystal Charity Ball, whose mission is to aid, support, and make contributions to children’s charities in Dallas County.

“It’s an impactful event for the city, from the charity perspective to the job perspective and to the tourism perspective,” explains Handal, who shared that several Preston Hollow neighbors have contacted her about emailing the City directly in support of the event.

“So right now, it’s all about making the most of those four days and maximizing the exposure for the designers,” Handal adds.

From 30 Days to Four

For the first time in Kips Bays’ history, there will be a limited run of show — from Thursday, September 22, to Sunday, September 25. VIP tickets, available now for $125, offer visitors a unique time slot,  with “more of a full-access look” on the 23rd and 24th, while those who had already purchased a $40 ticket will have it honored on Sunday. (Or they may request a refund at [email protected].) All opening day tickets (still available starting at $300) will remain valid.

“The majority of ticket holders, a good 70 percent, have accommodated their schedule to come on Sunday,” shares Handal. “Honestly, it says a lot about the Show House and the charity that people rearrange their schedules and even their travel to come in on one specific day.”

Exposure for the designers is another key component of the show homes. “You have the opportunity to create rock stars with Kips Bay,” shares Peacock. “It’s a once-in-a-lifetime opportunity for designers. It changed my career completely.”

To maximize exposure for the 24 designers working on the Dallas home, a virtual tour will be free for anyone to access (another first for Kips Bay).

For visitors, each of the four days is designed to feel like a celebration. Guests will be greeted with cocktails and most of the home’s noted designers plan to be present throughout the weekend.

“I’m staying for the whole thing,” Peacock shares. “It’s too good to miss.”

A ticket to a Kips Bay Decorator Show House is always prized, but perhaps never more so than this year. “It’s going to be the hottest ticket in town,” Handal adds.

The Future of Kips Bay in Dallas

When Handal, who opened the first Kips Bay Decorator Show House in Palm Beach in 2017, arrived in Dallas two years ago to consider launching a Texas show home, she was immediately sold. “I thought to myself, this is the perfect city,” Handal recalls. “Dallas is looking for an event like this. The design community is so strong and so committed. The first year we opened, people walked in the door and said, ‘Thank you so much for bringing this to Dallas.’”

Given the challenges of this year, it’s fair for supporters to be concerned about the future of Kips Bay in Dallas. “It’s my hope that we’ll come back,” Handal shares. “We have already set up meetings with the City next month to have a better understanding of where we stand and the options moving forward. It’s just about having the right information at the right time for next year.”

In the meantime, the designers have been rolling with the punches — something they’re already quite used to. “It’s been business as usual,” shares Lance Scott, who is responsible for designing the living room in this year’s Dallas show home. “We adapt to everything. It’s the nature of our business.”

That “everything” includes more than two weeks restricted from working on a project, plus the additional unforeseen circumstance of a 1,000-year rain storm. But designers PaperCity spoke to reported a rallying feeling among the group.

“Ultimately, this is for the charities,” Scott says. “All of the designers know what the point of this is, and want to support the design community. Everyone is still ready to put their best foot forward.” 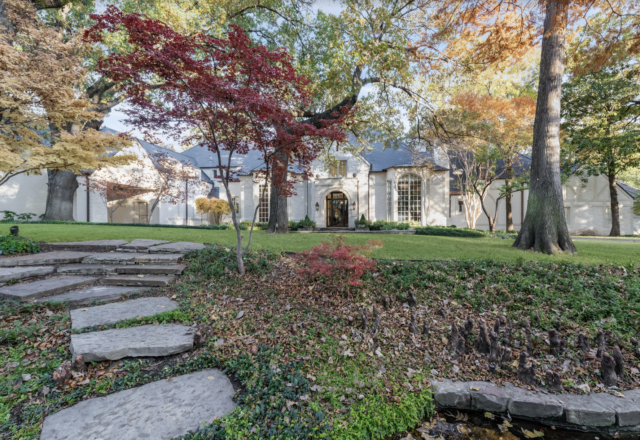