Fairmount is the largest historical neighborhood in the Southwest. Courtesy of Historic Fairmount

A castle, I mean house, currently for sale in Westover Hills. Courtesy of Briggs Freeman

TCU-Westcliff is one of the prettiest neighborhoods in Fort Worth. Courtesy of TCU

From Castle Estates to Millennial Havens 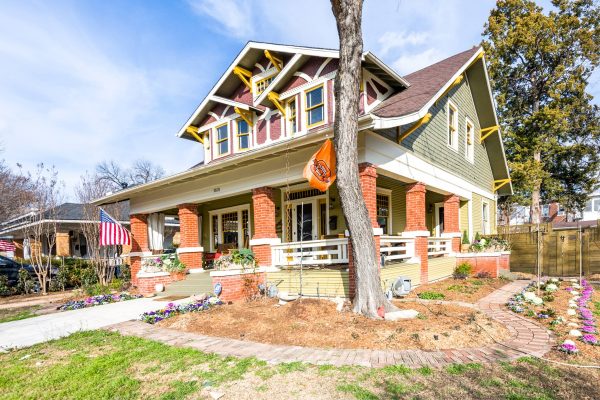 Fairmount is the largest historical neighborhood in the Southwest. Courtesy of Historic Fairmount

A castle, I mean house, currently for sale in Westover Hills. Courtesy of Briggs Freeman

TCU-Westcliff is one of the prettiest neighborhoods in Fort Worth. Courtesy of TCU

If you live in Fort Worth, you already know that that the city has some of the nicest and most interesting neighborhoods in the state of Texas. It even includes one of the wealthiest towns with the largest and highest valued homes.

From perfect beginner homes for millennials to castle-like estates, this grown-up Cowtown has got it all. Whether you’re looking to move closer to the nightlife or settle into a quiet, country club oasis that’s still within reach of the cultural district, Fort Worth is overflowing with options.

But which ones do you really need to know? These are Fort Worth’s Best Neighborhoods.

Located just north of I-30 and below Camp Bowie Boulevard, Arlington Heights is a great neighborhood for families and single millennials. Much of the neighborhood is suburban houses, giving those who like space enough space, while still being close in proximity to many things to do.

Next to the Cultural District, Arlington Heights has easy access to some of the best museums in Fort Worth. It’s also only a 10 minute drive from West 7th, which has tons of restaurants, shops and a movie theater. Most of the homes are cozy and craftsman style serving both young professionals and families.

Most known for Rivercrest Country Club, this exclusive neighborhood is located in West Fort Worth. Still close to downtown, Rivercrest (technically called Crestline) is a quiet place to live the family life, while being able to go in and out of the city when needed.

The community dates back to 1918 and features large homes with high value. Crestline Road is home to some of the most beautiful homes in the city, situated on a bluff overlooking the river. In this neighborhood, you’ll find tons of golfers and families with young kids, all surrounded by wooded areas and walking trails.

Being in the Near Southside district, Fairmount is a historic neighborhood in Fort Worth. It’s northern border lines right up with the popular Magnolia Avenue, which has several great spots for coffee and food. Ellerbe Fine Foods, Avoca Coffee Roasters, and the original Heim Barbecue are just a few excellent choices.

The neighborhood includes a park, an elementary school and middle school, making it a great place for kids. It has the best of both worlds with charming homes and lots to do around Magnolia Avenue. Known as the largest historical neighborhood in the Southwest, Fairmount has tons of historic and charming houses.

As its own city, Westover Hills is one of the wealthiest towns in Texas. The population is only about 700 people, but the houses are huge. Properties offer elevated landscapes that have views from the east and west. Most of the land was originally owned by Amon G. Carter and homes began to be built in the early 1930s.

The town is only about a 10 minute drive from the Cultural District so you can easily go see the latest museum exhibit when you like. It’s also only about a five minute drive to tons of restaurants in the River District, like Heim Barbecue, Salsa Limon, and Gemelle.

There are few negatives to living next to one of the most beautiful college campuses in America. This Texas Christian University-adjacent neighborhood features more mid-size homes than anything else, but it’s the super family friendly location that’s making it a hot neighborhood.

Many areas of the neighborhood fill into the Tanglewood Elementary school systems so there are a lot of young kids in Westcliff. And homes in Westcliff range in price from $200,000 to the millions so there’s something for a wide range of income levels. The neighborhood has easy access to catching a college football game at the Amon G. Carter Stadium or stocking up on gear at the TCU campus store.

Although Westcliff is definitely not just for college kids anymore, that doesn’t mean you can’t still show your Horned Frog spirit.

To get our new PaperCity Fort Worth newsletter, packed with stories, insights and happenings, click here.