Cornelia Guest at the New York premiere of "The Color of Money" with Halston, 1986. From the book “High Society,” Assouline

Cornelia Guest and Olive Guest, photographed by Lauren Withrow for PaperCity at the Virgin Hotel Dallas Cornelia Guest at the New York premiere of "The Color of Money" with Halston, 1986. From the book “High Society,” Assouline

Cornelia Guest and Olive Guest, photographed by Lauren Withrow for PaperCity at the Virgin Hotel Dallas

A sleek black Porsche Cayenne is gently vrooming in front of me as I pull up to the valet at Mirador restaurant. The driver emerges in a white bouclé Chanel coat with a Chanel flap bag, no doubt from the same season, but dressed down with a cozy cream sweater, skinny jeans, and over-the-knee mauve boots. Her coiffed mane of blonde hair grazes her shoulders. We have met before — at the glittering Christmas party at Ann Hobson’s home this past holiday season — and I know immediately this is my lunch date. It’s Cornelia Guest.

If you haven’t heard the chitchat, Guest has moved to Texas. Dallas, specifically. The rebellious debutante daughter of C.Z. Guest and Winston Guest; the ’80s It-girl and Andy Warhol acolyte; the actress, author, designer, animal activist, and social force is selling her New York estate, settling into a Highland Park rental, and shopping for a ranch in East Texas.

She spent the first part of her life pursued by paparazzi — we all remember shots of the stunning girl with the nimbus of ’80s hair and voluminous shoulder pads at watering holes like Indochine and Studio 54. Now she’s entering her next chapter in Texas. Guest started nesting in mid-January, and she is legal.

She triumphantly shares that she has a brand-new driver’s license, then enchants and bewilders me with her delightful experience with the Texas Department of Public Safety. Somehow she traversed the whole notoriously arduous process with ease — and maybe with a new friend, “I even chatted up the guard about how easy it all was.”

I had pulled some strings of my own at Mirador, making sure we would have a quiet table and that there would be dining options for Guest, as she is an avowed vegan. We settle into a secluded spot by the windows overlooking Anthony Howe’s kinetic wind sculpture, and Guest proceeds to order completely off-menu, but with such graciousness and charm (and the fact that she is Cornelia Guest) that the staff seems eager to accommodate the dish she concocts on the spot.

“I know just what I want,” she tells the server. “I love kale. And I love baby lettuces too. Ooh, you have arugula. You know what I want? All of that with some light Meyer lemon dressing. Maybe they could add some radishes… and herbs.” Did I mention she also has a catering company with star clients such as MAC cosmetics and Donna Karan?

“Why Dallas?” is what I was longing to know. She had been living two hours north of New York City in Ancramdale and had grown tired of the cold winters, she says.

In mid- January, the New York Post broke the news about the sale of her 456-plus acre estate, which she affectionately calls her farm. She says that looking for warmer weather, a location closer to Los Angeles, and a home large enough to house her menagerie of rescue animals made Texas seem like a fit akin to Jean-Michel Basquiat and SoHo. She explored all corners of the state, starting out in Austin Hill Country, making her way west, and finally visiting longtime girlfriends Nancy Marcus and Brooke Davenport in Dallas.

Explaining the terrain she was looking for — something with long vistas for her furry and feathered family — they advised her to look no further than East Texas. Guest promptly ensconced herself in what she calls a “cozy, charming” rental home in Highland Park, living with a housekeeper who moved from New York with her, and her Westie terrier Olive, who almost never leaves her side, as she continues her search for ranchland off of Interstate 20.

The remainder of Guest’s menagerie is also in the process of relocating from New York. That includes six dogs, lambs, donkeys, horses, birds, and pretty much every other creature that might have been in need of rescuing. She tells the story of the duck that lives with her, literally inside her home, and has been known to jump into the bath with her in the mornings. Guest lovingly hatched it in an incubator, and it was the only one of six eggs that survived (appropriately it’s named Lucky). After living in the house among her dogs for the first few months, the duck was brought outside to be amongst its own kind, the quacka-doodle-doo set. But Lucky was aghast and quickly leaped back into her arms. It was not identifying with the guinea hens and other waterfowl, but rather to Guest’s four-legged, tail-wagging children. Perhaps Lucky is the first species-fluid pet.

Guest’s move to Texas is potentially the next chapter of her popular 1986 memoir, The Debutante’s Guide to Life. I’ll tentatively call it Deb Does Dallas. The book gave a tongue-in-cheek view to the so-called blue-blooded life to which she was born. Girls preparing for their debut, as well as their socially ambitious mothers, were schooled through sections devoted to “Practical Social Climbing for Parents” and “The Seven Deadly Sins of Deb.” (No. 6: “Writing on someone else’s monogrammed stationery. This is so outré as to leave most hostesses completely bewildered; do you come from Mars?”). Foreshadowing her current life is a section called “Party Service in Dallas,” featuring the self-proclaimed “social secretary of Dallas” Ann Draper and tips for Texas debs.

Guest always had a certain irreverence about the world she was born into, but there’s no denying she had an upbringing that deserves a Netflix series akin to The Crown. Her father, Winston Guest, was a polo champion and a distant cousin of Winston Churchill. Her mother Lucy Douglas “C.Z.” Guest, was one of the last grand socialites. Her godparents were the former King Edward VIII, the Duke of Windsor, and his wife, Wallis Simpson. (You know, the royal who perhaps set the path for the current Megxit predicament.) Guest briefly attended the Foxcroft School, but over bites of salad, she shares that she missed her mother and father so much that she returned home.

I have brought along some conversation starters — a few vintage issues of Andy Warhol’s Interview magazine. Guest flips through the yellowing pages as if she is looking through an old high school yearbook, pointing out dear friends and mentioning that she could always be found in the magazine. I query if she has ever been on the cover, but alas, no.

“Andy was a good friend but never put me on the cover,” she says and goes on to give a charming imitation, employing the nasal, somewhat adolescent, and perhaps calculated naiveté of the celebrated Pop artist: “Cornelia, let’s please go to Odeon tonight.” Warhol was amongst the many celebrities — including Truman Capote and another famously rebellious socialite, Doris Duke — who attended her 18th birthday party.

Guest bucked the path that many debutantes followed. In essence, the whole idea of coming out to society was so that young women of privilege could meet young men of good breeding and, of course, wealth. Guest wanted a bigger, independent life. Her mother was quoted in a New York Times Magazine story shortly before her death in 2003 as saying: “Cornelia is some number. She is a star, and she wants to be a superstar.” She was referring to her daughter’s decision to move to Los Angeles to be an actress.

She still keeps an apartment on the Left Coast for frequent visits for meetings with her agent and casting directors. And I’m surprised that she looks so fresh-faced and rested at our lunch, given that less than 24 hours before she had been in L.A. for auditions and awards season events including Tom Ford’s star-studded runway show, and the Chanel pre-Oscars dinner. Guest studied acting at the Lee Strasberg Theatre & Film Institute, and her most noted role was in the reboot of the cult-favorite Twin Peaks (“a once-in-a-lifetime experience,” she says). She’s also been seen in the Netflix movie Carrie Pilby, among other films. In 2017, she founded Cornelia Guest Productions and is currently working on a few projects.

Philanthropy has been another big part of her life. Among many causes, Guest has been a supporter for New Yorkers for Marriage Equality and, in 2010, alongside then-mayor Michael Bloomberg, hosted the New York flagship event, another
type of coming-out party — for friends in the LGBTQ+ community, if you will. She’s also a longtime supporter of animal rescue and assistance groups. In 2016, she founded Artemis Farm Rescue, a nonprofit specializing in miniature horses and donkeys with a goal to end all equine suffering. Guest grew up around horses and was a renowned equestrian like her father. She rode until her mother’s death in 2003, then decided to climb out of the saddle and focus her attention towards animal rights.

As we finish our lunch interview, she says, “It’s my turn” and barrages me with questions about her new city. “Where do I find orchids that aren’t at extortionate prices? Some unique antique stores with some whimsy?” With that, I take her on a drive down a gentrifying stretch of Ross Avenue and pop into Dolly Python for a quick shop. I was wary, since it might’ve been too far out of left field for many former debs — but am elated to see her with iPhone whipped out and snapping away at elementary school anatomy posters, trucker hats with no irony, and other quirky finds. Guest seems enchanted by it all.

The hipster millennials in the shop glance at us and seem intrigued. Did the patrician-looking blonde take a wrong turn on her way to Chanel? No, Guest is actually creating a list of out-of-the-box hostess gifts in front of my very eyes. She is feeling at home.

When we part ways in the parking lot, she thanks me for the quick tour. “No one knows where anything is nowadays,” she says as she climbs into her car. “You type something in your phone and then use its navigation system. There is no more exploring. I hate using Waze because I don’t learn the city.” In unison, like old-timers, we reflect how we miss the days of being happy to get lost for hours on end and having an adventure.

The questions continue the next day at Guest’s portrait shoot at the Virgin Hotel Dallas. Engaging with everyone around her, she asks, “Where can I find cheap water?” Yes, Guest is that girl. Resourceful and somewhat frugal. I point her toward the Kroger in Uptown. Next time you are at that grocery store, keep a lookout for a stunning blonde. Perhaps in a cozy Brunello Cucinelli cashmere sweater with a devoted Westie by her side.

Chat her up, particularly if you are looking to rescue a donkey. She’s beyond fabulous, and she is our new neighbor. 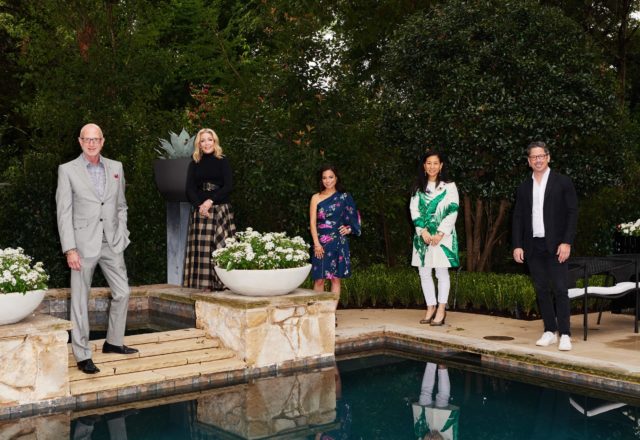