When you walk into Electric Shuffle, the industrial-style bar grabs your attention. 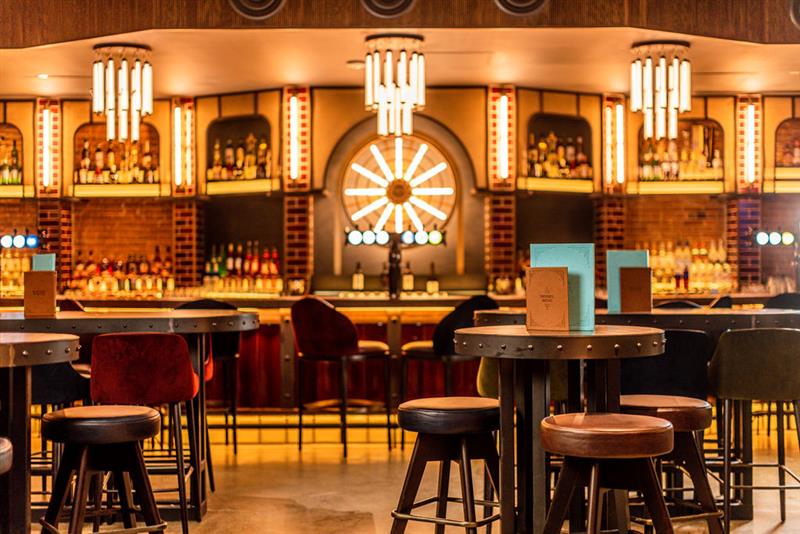 When you walk into Electric Shuffle, the industrial-style bar grabs your attention.

Landing in Dallas for its first location outside of the United Kingdom, Deep Ellum’s Electric Shuffle opens its doors on Friday, November 19. The bar-based blend of cocktails and entertainment is similar to that of nearby Punch Bowl Social or Whiskey Hatchet, but the UK import differentiates itself by putting the focus on shuffleboard. But you know, sexier shuffleboard.

Electric Shuffle uses custom tables that incorporate interactive technology (developed by rocket scientists — truly), and allow up to 20 people to play at a time. There are four in-house games to keep play fresh, along with a mix of genuinely good-looking cocktails and food.

Given its British origins, there’s a healthy dose of steampunk in the new Deep Ellum bar’s design. The second floor, however, was the spot to be. With its own bar, and tons more shuffleboard tables, it felt like its own little hideaway. Electric Shuffle also has seven uniquely designed event spaces that can host groups from 20 to 500 people.

The Electric Shuffle menu is filled with classics, from truffle mac and cheese bites ahi tuna tacos to pizza, burgers, and a veggie BLT.  You can grab an Aperol spritz a cocktail like the Liv Lav Love (a vodka, lavender, lemon, simple syrup, and egg white concoction) that is quite tasty. Or make winners of everyone with shareable Trophy Cocktails served in an actual trophy cup.

And if you’ve got a big group, check out the Celebration Cart with a magnum bottle of bubbly and cake pops for all ($50) — which also gives 10 percent of its sales to support The Birthday Party Project. This organization helps to bring joy to children experiencing homelessness through the magic of a birthday celebration.

On weekends, Electric Shuffle will be serving brunch from 10 am to 3 pm. Packages can be reserved for four to 20 people for $50 per person. Each guest will get their own bottle of bubbly with juices for mimosas. There’s also a special bacon jam breakfast pizza or brunch board to indulge in all while getting competitive with shuffleboard.

Power Hour is another exclusive time for guests an hour of bottomless pizza, shuffleboard, and two drinks each. Reservations can be made for three to 16 friends for $25 per person.